When compling the Qt based program on Ubuntu, following error is shown

I tried apt install libopengl-dev but it doesn't work.

In shiboken documentation, it's saying the separator of include path should be : (colon)

But on Windows every full path is containing colon (e.g. C:\Windows\cmd), it will mess with the colon separator.

In its source code printUsage() function I found it's actually using a PATH_SPLITTER macro to represent the separator. And under windows it's semicolon..

At past I'm using colon as separator:

And I got lots of error messages like following:

type is specified in typesystem, but not defined

After replacing colon with semicolon, these errors are gone.

Recently I need build libewf on Windows, and MinGW is chosen as the compilation tool.

I read source code of autogen.sh and realized that it's trying to locate pkg-config at /mingw/bin directory,  Then I checked MinGW installation directory and bin folder, found there is no such pkg-config file. So we need install pkg-config manually.

At MinGW Wiki page it introduces two methods to install pkg-config, but using a pre-compiled version is much easier. Here is pre-compiled pkg-config download address from SourceForge. After downloading is completed, extract pkg-config.exe and move it to MinGW/bin directory, retry running autogen.sh we will found this problem is solved

When I’m trying to compile the C++/CLI project in Visual Studio 2013, I got an error saying

This post said MSCOREE.lib is removed from Visual studio 2008, but I’m not sure it’s also working for Visual Studio 2013.

After searching a while, I found this file is located at C:\Program Files (x86)\Microsoft SDKs\Windows\v7.1A\Lib. Adding this path to Additional Library Directories property value will solve this problem. 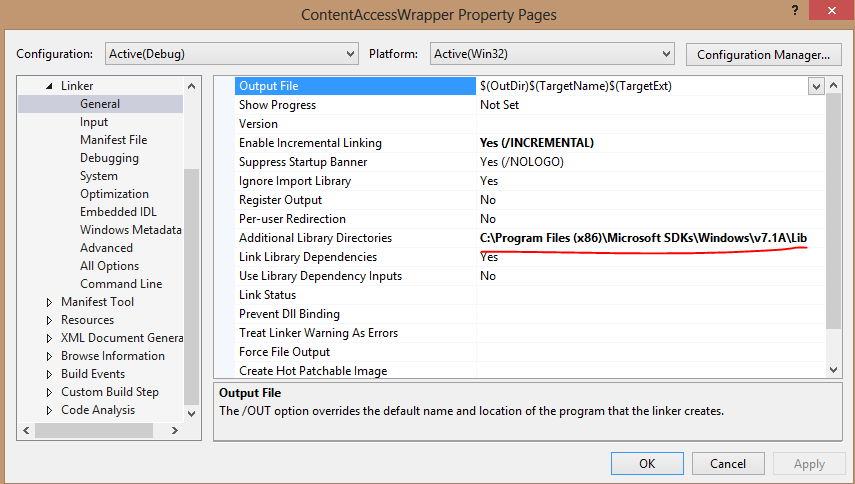 When including libavformat/avformat.h in VS2008, I got following error:

UINT64_C was not defined in this scope.

Add following code before including avformat.h will solve this problem: